This special guy, surrendered by his owners to NCGL today (2016-09-17), is 29 months old (estimated DOB June 2014) and as handsome as can be – especially his wonderful eyes. His owners said “he’s ½ black, ½ white” when they called us to pick him up. Only his face comes under that description – the rest of his body is entirely white.

Lenny (fna Boofer) is a bit timid, and wondering what is going on in his life. He rides well in the car and hops in with no effort at all. He is very curious on leash, wanting to check everything out along the way. He was also very curious when meeting his foster brother Braun, even though he had lived with 5 other Greyhounds.

Here’s an update from the Foster family……

“Lenny is getting cuddlier every day and much better at interacting with strangers and company. But, he is a dog that will need a firm but gentle handler. He tries to push boundaries but is learning quickly to respond positively to corrections. He’s a young boy and has lots of energy but is very smart and trying to do what is right. There is a little bit of possessiveness of things he thinks are his but has yet to challenge Braun (his foster brother). He looks to Braun for advice on everything; even downward dog stretches (play bows).

He follows both of us around the house and in the yard. He greets foster Dad at the door when he gets home. He’s very inquisitive about everything we are up to.

He tested well with a Boston terrier (both dogs were on leash) and he didn’t have any interest. This might be a different story if the Boston were running loose. Will test again with him muzzled running loose in the yard.

He’s eating kibble and dog treats now and got his first marrow bone.  He didn’t know what to do with it but learned very quickly that it’s an awesome treat!! We are looking forward to seeing this incredibly smart dog progress. He is starting to respect the bounties of things out on counters and will leave it when told to. At least he’s responding to “leave it”! The first couple days here he could care less what you said he’d try and grab it.

He walks pretty well on leash but best to hold on tight when a squirrel is nearby. Two good walks and a play time in the yard seems to work to keep him amused. Loud noises seem to spook him a bit and he is leery of big trucks.

He walked with the Boston terrier and only showed a little interest at first then really could care less after a few blocks. We did walk him behind a little white fuzzy and a Yorkie and he was very focused on them. Continued correction methods should improve interactions with them.

He really is getting very affectionate. He likes to snuggle and rest his chin on you in such an adorable way.” 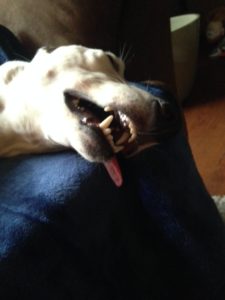 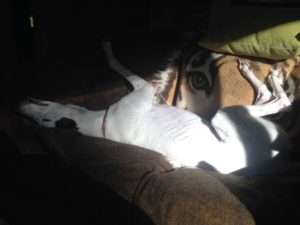 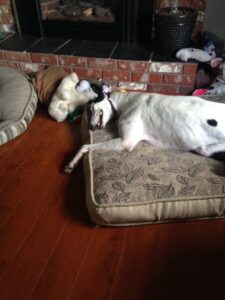 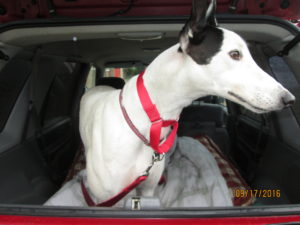 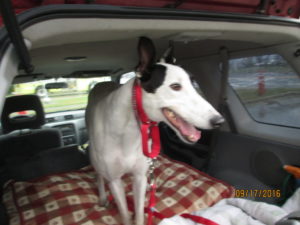 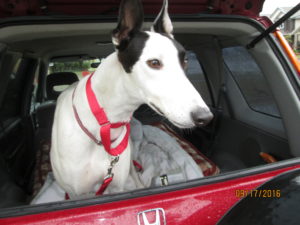 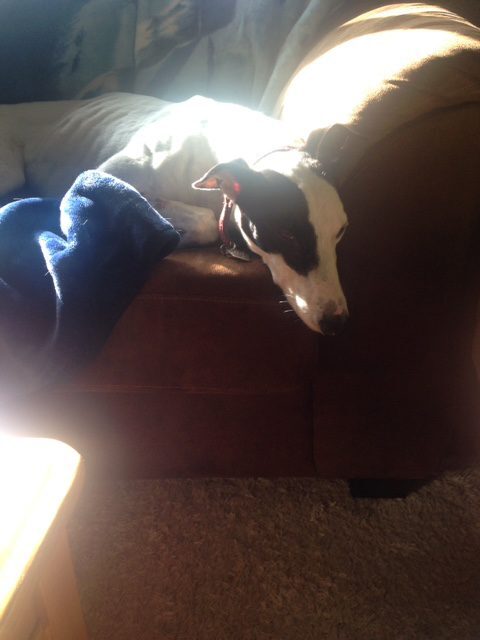