Tiger, born on June 30, 2016, is a sweet guy who is excited with life in general and has a puppy-like personality. His family are tearing down their old home and rebuilding a new one. They felt he would not be getting the attention he deserves over the next year during construction and turned him over to NCGL to be re-homed.

Tiger walked pretty good on leash and rode well in the car once he got some help to get in. He gets along with other dogs and is not fond of cats, but has never lived with a cat

Tiger will need to get his vaccines updated, have neuter surgery, micro-chip and dental before going to his forever home.

More updates will follow as we get to know this handsome guy!

Tye is starting to get comfortable.  When he arrived, he would not walk through a doorway, would not  do stairs, trembled uncontrollably when frightened.  My husband had to carry him into the house and put him in a bed.  After a small meal and quick walk that first night he slept well with 2 other Greyhounds by his side.

Tye does loves his walks. Drags me along. Once he is more adjusted, I will work on proper leash etiquette.

This morning was a new day. When I got up, he actually had two front paws on the bare floor. I put small carpets down which lead to the door. His need to pee outweighed his fear to walk on a floor. Took 2 minutes to get him outside. Once back at the house it took about 4 minutes to enter the doorway on his own.

Once his confidence is built up, he is going to be a great family dog. He is sweet as pie, loves other dogs and does not bark (unlike my other 3). I hope he doesn’t pick up their bad habits.

We just had a huge break through. He made it up seven steps to our back deck. Took an hour but he did it and he was very proud of himself.

He was so happy he tried to mount my other female Greyhound. That did not go over well for him!!  So many things to learn, but he is obviously coming out of his shell at bit.

It has been two weeks since Tye came to his foster and it is time for an update on his amazing progress.

Tye’s confidence increases daily. He has come such a long, long way in a short time.  He enters all doorways without hesitation, he can walk on polished cement floors, tiled floors, hardwood and carpeting.  Tye is still a little hesitant on our tiled floors and hardwood but that is mostly do to my other greyhound, who shows no mercy.  If Tye is not moving fast enough she sideswipes him and sends him slipping and sliding. Tye is learning to walk well on a leash and stay close to your side.  He does need reminders if he starts to pull, but he knows if he relaxes the walk is much more enjoyable (for both of us).

Tye’s greatest achievement is stairs.  He can go up and down wooden or carpeted stairs without hesitation, even if three other dogs are racing past him. He has total confidence with stairs.

Tye’s nemesis is the vacuum.  He cannot figure that monster out.  We are going to work on that one.

This week he had this neuter surgery and is enjoying a full recovery over the next week or so. Tye is now looking forward to finding his forever home.

During the week prior to meeting the trainer, I finally figured out the trigger for Tye and his anxiety outbursts.  It was me or the way I was dealing with his outbursts of anxiety.  Each time Tye acted up I tried to calm him.  I would hold him down if he jumped up. I would remove carpets he tried to shake and rip up, etc. Then it dawned on me that he was trying to express stress and anxiety in the most negative ways.

From that point on, I supplied him with lots of toys (before he would rip them apart and swallow them) so I took them away.  Then I gave him earless and tail-less toys and played tug of war with him.  Tye would play endlessly. His issue was mainly anxiety.

We have since contacted and met with a dog trainer/behaviourist.  We found him to be fabulous and highly recommend him. When first meeting with the trainer, we discussed Tye’s issues and he agreed Tye has no self-control over his impulses. As a result, we were given tools to teach Tye to calm himself if Tye wanted humans to do his bidding.

This is going to be a bit of a process, but I can tell you it is working. If Tye wants his meals, he has to first sit and be asked to come to his bowl. If Tye wants to be petted, he must come and sit beside you before he gets any loving.  If he displays unwanted behaviour he is separated from me.  An example is if he jumps up you, walk away and if necessary, go into another room or put him outside.  Once he calms himself, he must first sit before you approach him.  Tye has to learn self-control before he gets what he wants. He is learning, but his adopted family will have to learn these teaching techniques.

Tye has learned to go into the yard and play with his toys or play with the resident Greyhounds.  Although playing with one particular hound may not be the best as she is teaching him lots of naughty things.

On walks I keep Tye muzzled, just in case he loses self-control.  In the house if he starts to wind up his muzzle goes on. He can start to chew furniture.   I definitely allow him to throw his toys around or whip his rope knot around (though I am sure he is going to knock himself unconscious).   These activities really seem to release his stress and anxiety.

I do believe he is ready to go to a forever home, but they need to be an experienced home. Not a first-time dog owner.

He does not seem interested in cats, but I will work on this more in the coming week.

The trainer is happy to work with Tye’s new family if they so desire. He was very good with Tye and Tye really responded.

Tye has lived with his foster family for 14 weeks.  He has settled nicely into the pack.  Tye is dominated by my two female greyhounds but does like to think he is a notch above my Aussie.  If Tye pushes it to far with my Aussie, Fin swiftly puts Tye in his place.  Tye will back down immediately.

Tye is an overly affection dog.  He loves to be petted and snuggled and will literally crawl up on your lap (which we do not allow).  We have started to teach Tye that he cannot be so clingy.  After he has had his fair share of attention he is gently moved away and told to go to his bed.  Often when this occurs Tye will pace around the kitchen island for awhile before he settles down or he will go and find a toy.  On a very good note Tye has come to a truce with the vacuum cleaner and no longer views it as a monster.  In fact, he completely ignores it.

Tye still loves his toys and spends many happy hours in a week throwing them around, chewing them and making them squeak.  If one of the other Greyhounds decide to steal Tye’s toy, Tye will object very loudly.  Tye has learned to bark.  Tye loves to run in the backyard.  He is happy to run on his own or with the other dogs.  This boy can really move!

We are still working through Tye’s anxiety (tantrum) issues.  He is not jumping up on family members in the house as much as he did before.  If he does jump up he understands what a very firm “no” means.  Tye is walking well on the leash but when he realizes we are getting close to home he starts to jump up and twist around and have a tantrum.  We will get to the bottom of this behaviour.  I am trying several different strategies to get Tye to calm himself.  Tye is definitely a Greyhound who will need a lot of exercise.  I do believe wearing Tye out once a day will do him a world of good.  He presently gets excited if you run with him, so I am starting to just get a few steps at a time.  Biking with him might be a good exercise for Tye, but I have not tried that yet.

Tye is definitely not cat friendly and should never be housed with a cat. 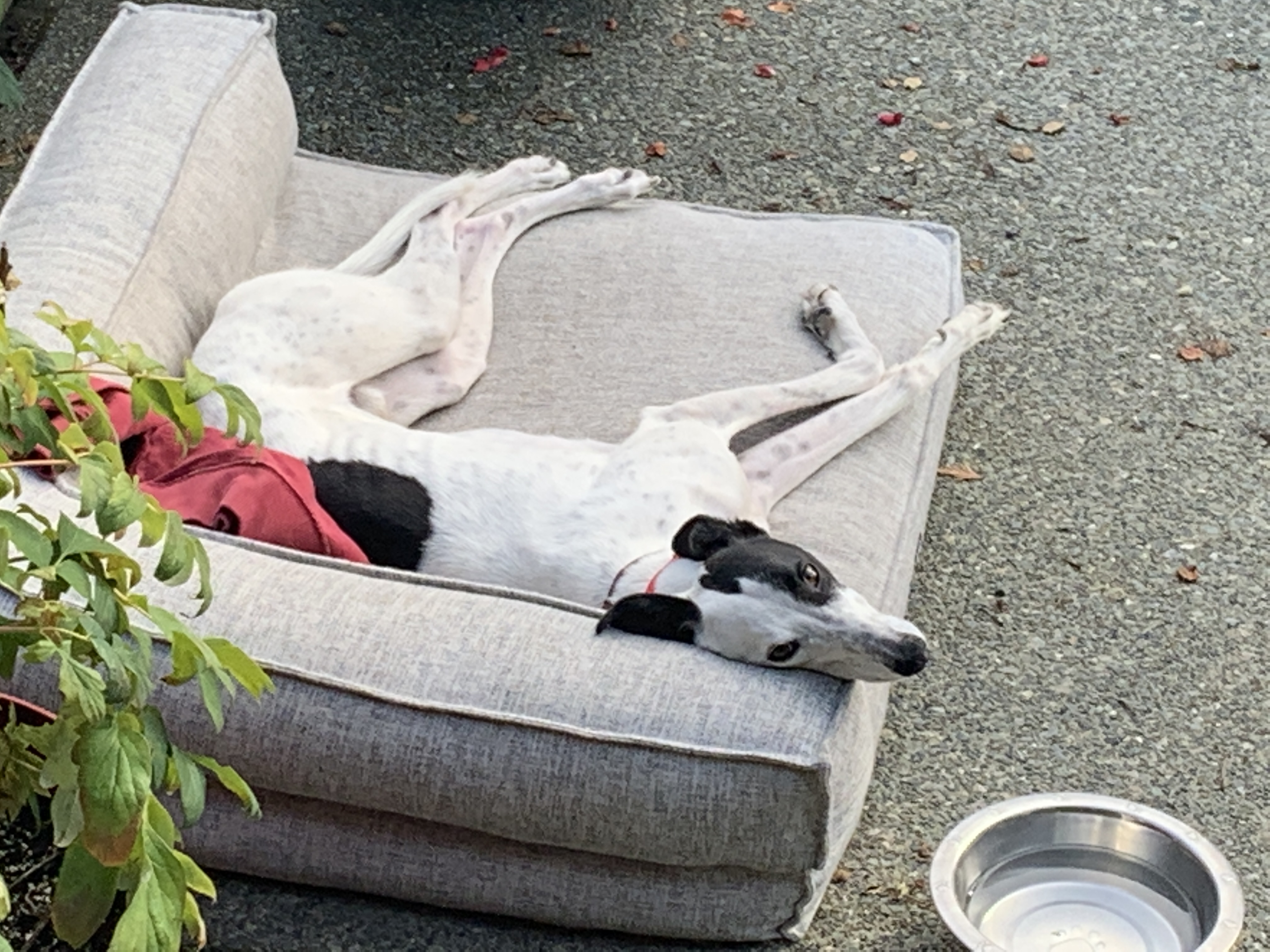