Penny, born on April 15, 2016, weighs in at 63.8 lb.,and is a black female Greyhound who has been surrendered to NCGL by her owner, through no fault of her own. She is a very sweet little girl who enjoys the car, watching everything along the way. She leans in for pets where she feels secure. She appears to be is a little shy of the outside world, but curious.

She was happy at the vet’s office while getting her micro-chip and vaccine updates, didn’t mind at all being examined and touched.

She is good with other dogs and children but has not been cat tested. We will update her bio when we get to know her a bit better.

Penny is delightful, loving, playful and VERY curious. In her attempts to get the resident Greyhounds to play she has been met with resistance, barks and “get out of my face” attitudes from both the hounds. There must be some Irish in her because she is quite persistent with attempts.

Penny had her spay surgery today and returned back to foster late in the afternoon. She is not feeling very well and appeared to be in pain. Extra meds were given to try and settle her down and help her rest and start to heal. Penny has been moved to another foster home and we will update her status in a few days.

We opened the windows for her and she was much more comfortable once the house was cool.

We set up a huge kennel for her and she seemed to enjoy having a quiet place of her own. Plus it’s in the spare bedroom which is pretty cool so she didn’t pant. She cried at first but then settled down and actually slept for a few hours.

We brought her out again at about 8pm and she walked right into our bedroom and got up on the bed (see photo). She then played with toys in the living room for a bit. Once she had some food and her meds she settled into the kennel again and slept soundly all night with no accidents.

This morning we all got up early to take me to the ferry and she did her business in the yard and then rode in the van with us and the other dogs.

Penny has been moved to a third foster home – her previous folks had another commitment scheduled and she had to find another family to take her in. She is now residing with several other dogs where she can run and play in the huge fenced area. Here is their first update:

Penny is a luv bug. Very affectionate. A very secure confident girl. She settled in at her new foster home very easily. Learned how to use the dog door by watching the other dogs and figured it out in a flash. She instinctively goes outside to do her business and has had no accidents.  That said, our dogs have 24/7 access to the dog door so if her new home doesn’t have one, she will have to be watched for her ‘gotta go’ signs. Pacing, circling and whining.

She is not a fan of the crate but there has been no need to crate her, she is not destructive and sleeps beautifully out of the crate.  She has not counter surfed or stolen/destroyed anything?

In the house she is calm and quiet…UNLESS she wants to play. Then she is very vocal towards the other dogs. She barks when she wants to play (which is a lot, she thinks she is still a playful puppy) and she barks while she plays.

As long as she is well exercised and has a chance to burn off her energy, she is a calm quiet couch potato. She is very very affectionate and loves people.

Penny would do best in a active home and/or a home with other active dogs. She has met dogs of all sizes and temperament while here and she has been lovely with them all. She just wants to play and run about with them.

Penny is super sweet, smart, beautiful (soooo soft!), learns quickly, and just a joy to have around. 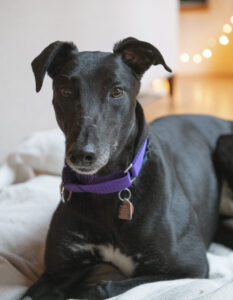 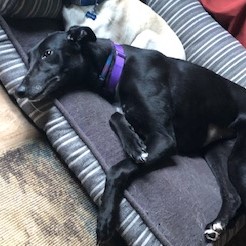 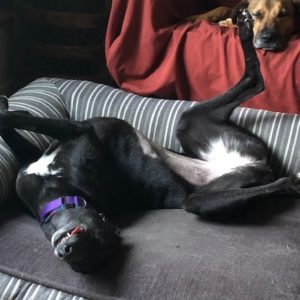 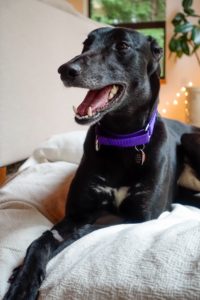 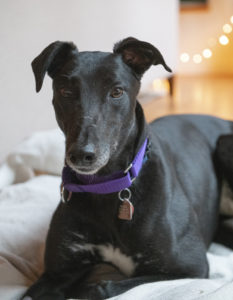 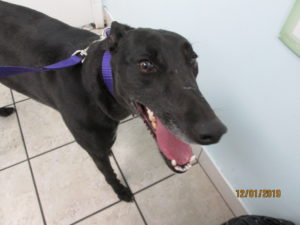