Newt is a Greyhound/Wolfhound Cross born on August 18, 2018.

Newt was born on a farm but has since realized he would really love a good comfy couch! So, he is looking for a forever home with a couch, a TV, a routine and a bit of a yard. None of this needs to be huge. He would sure be happy if it had some fun stuff to do too!  After being such a good boy in his crate during the day, his fosters take him out for a bit of exercise. A nice walk or a game of chase the ball He doesn’t mind cats, but a doggy playmate would be nice if you happen to have one. He has learned to sit, shake a paw and is good on a leash. He loves to people watch and will sit in a window and watch people and their fur friends walking by all day.

Sometimes, if left to his own devises…. he can’t resist the opportunity to chew a few things, so foster mom gives him things to keep him busy, such as a puzzle with food incentive! Newt really, really likes squeaker toys! That squeaker doesn’t have a chance!

Newt is sweet and loving (likes to lean against you with his toys when he wants to play or lie on you. Everyone loves Newt. He does have his annoying teenage puppy moments, but this will settle.  He whines occasionally and when he wants out. He growls at himself in a reflection and if he sees other dogs. He seems to be good with other dogs after a bit of testing the limits by NCGL. He play-barks/nips at the air when he’s bored. You have to help him find his toys or find something to busy his mind.

Newt sleeps in the bed or in his crate. He prefers to snuggle in bed.  We don’t mind but he may need a bed beside a bed if that’s not working for you. He doesn’t make any messes or chew at night. When directed to sleep he usually does.  He whines if in the crate at bed time; he will stop but clearly prefers bed snuggles.  Newt is great on a leash. Does see small animals and is interested but nothing uncontrollable. We are working on wait command by using flat palm in the face and saying Wait. In the house Newt will come when called and is happy to do so, especially if there is food. He has only been walking in the neighborhood and has no experience in a dog park so this would need work. I can’t say if he would be good for recall there.  Newt is calm around the house and is not chewing our things, but we give him things to keep him busy.  He is very calm and sweet when meeting new people.   Newt has had some puppy training. He knows sit, shake a paw and sort of lay down. I’m introducing a down hand signal (sweeping hand across floor) and saying down. He listens well in the house. He pays attention on walks. With time, attention and continued training Newt will get better and better with responding to commands.

He does like to play and bite/chew his toys ON you and can mistakenly bite but not intentionally. We are using stop as a command. He likes to play fetch but would rather pull or wrestle you with the ball in his mouth than drop it. If you give him time, he will drop it for you to throw. He knows where his toy box is and will pull out the toy he wants.  Sometimes he plays by himself other times he initiates play with you. He is not rough when he plays in the house so there is no reason to avoid playing indoors. The more engaged he is the less likely he will be bored.  Lots of toys is a must. He loves to shred the stuffed ones and doesn’t eat the stuffing. These are his favorite. Newt is independent yet wants to be with you. He is happy if you don’t fuss all over him but loves to snuggle. He does not appear to be jealous or in need of constant attention. He happily shares his bed and the couch. Newt seems to be okay with grooming- brushing and nail clip. Newt would do well in a calm home, with firm but gentle handling, lots of stimulation, a schedule and socialization with other dogs. Knowing he is loved and safe he will thrive. Newt would prefer a home with a fenced yard to play in. 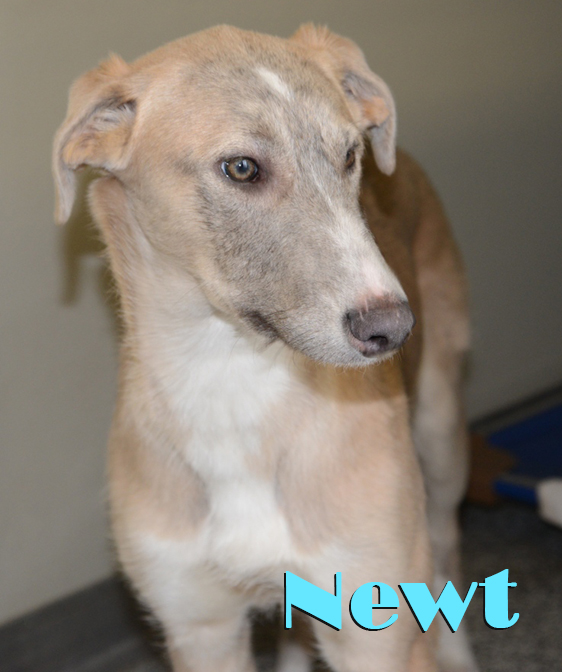