Ebeneezer was born on March 1, 2014 and is a friendly, out-going guy. He has done well in his crate and he enjoys rawhide bones. He is still learning his manners, so watch him closely in the house initially.

Ebeneezer interacted well with the other Greyhounds and responded well when meeting Jack Russell Terriers, but caution should always be exercised with smaller animals, especially outdoors. He did well in cat test, but has never lived with a cat. The use of a muzzle is recommended initially while monitoring closely.

Ebeneezer (now being called Ebi) has been settling in very well. He’s curious about the cat but backs off when she hisses at him. He does get into EVERYTHING and it wouldn’t be surprising if he actually jumped right up on the counter one day. He is crated while cooking in case he puts his paws up on the stove top or sticks his head in the oven! He has learned quickly that he’s not allowed to stick his head in the fridge and he’s almost figured out how to open the cupboards and closet doors to get at the dog/cat food! If there’s food, he’ll figure out how to get it.

Ebi is crated when left home for a couple hours. He’s been quiet and never makes a fuss – he probably will not have separation anxiety issues; but that said, he has his foster sister in the same room.

He walks well on leash and has been great with other dogs. Small off-leash dogs make him a bit too excited so the use of a muzzle is still used while on walk through the Colwood Creek dog park.

Ebi is one who tries to help drive (he’ll try to crawl on your lap while you’re driving) – not very safe. If someone is going to drive for a long distance with him, it would be recommended having someone in the passenger seat or a divider/kennel in the vehicle to keep him from trying to jump in the front. Foster is investing in one of those dividers after having him in their car. 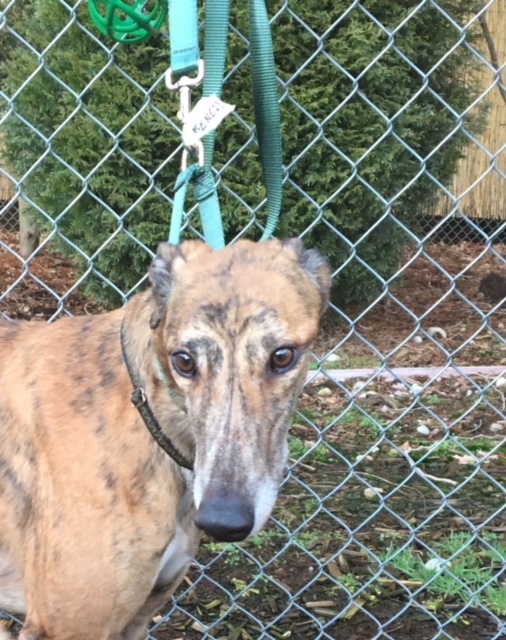