Our super special, former forever-foster, miracle-man Gonzy is looking for a family to call his own!

Gonzales is a big handsome boy with a fun-loving, sweet disposition and a huge love for his people.

Despite his cerebral setbacks (read Note: below), Gonzo is a very smart dog and an amazing problem solver. He taught himself to ring a bell at the back door to go outside, after watching his foster sister doing it for only a week. He excelled in his nose-work classes and has benefited from brain boosting problem solving games. He even figured out how to open a drawer (by literally tugging back on the handle with his front teeth) in an attempt to access a box of chocolates that were hidden there (to stay safe from the dogs).

As impressive as this is, it can get him into a bit of trouble when left alone for long periods of time. He can manage a couple of hours (though he’s not even crazy about that!) but will howl (so no apartment dwellers!) This is only because Gonzales is very smart and suffers from separation anxiety (he really does love his people SOO much). By working with Gonzo on a gradual basis, his new family should be able to overcome a lot of this anxiety. He could be crated comfortably for short periods if safely introduced in a positive way.

He loves car rides, people of all shapes and sizes, shopping, the dog park and just basically being anywhere with his human. So if you don’t mind an 80lb, goofy, gangly, constant companion, he’s your guy. Maybe there’s even a daycare (human or canine!) out there, or a mom or dad who works at home, or maybe even someone looking for a shop or office dog to take with them so he can be an enthusiastic host.

Gonzales would also do well in a home with cats, and while he gets VERY excited when he sees cats, squirrels and rabbits outside on walks, he has done well with indoor cats and has lived peacefully and safely with two cats in one of his part-time foster homes.

He also loves to meet new dogs…but the feeling isn’t always mutual as Gonzales has a hard time expressing himself properly and sometimes his doggy language can upset a more excitable (or less patient) dog. He gets a little ‘handsy’ when he wants to play. He’s been doing great at doggy daycare and loves to meet new friends (this is also GREAT for his separation anxiety because it tuckers him out!).

All in all, Gonzy would likely do great in a home with cats or dogs (or kids!) of any sizes with proper introduction and supervision until they get to know each other. He does great in a pack and does seem to learn from other dogs and mirror them, but doesn’t seek attention or company from them because people are really where it’s at for Gonzales!

Note:     When Gonzy first arrived at NCGL it was apparent that he definitely had some suspected medical issues. Over the first several months, NCGL sought out thorough examinations, tests, and an MRI that revealed a severe brain abnormality in the cells responsible for his movement and motor functions. About 6 months after his initial diagnosis, he was brought in for a follow-up MRI to determine the progress of his condition. Miraculously, it didn’t seem to have changed. The neurologist determined then, that it was likely a condition he had contracted as a puppy where he became very sick, but then recovered and should not get worse. He would just live the rest of his life a little ‘differently’.

Beyond his awkward body language and inability to process excitement properly (he’s most famous for running and hopping on to his front feet in a handstand!), he has more love, sweetness, patience and silly antics than his gangly, goofy body can harness. He is a gentle giant and a true diamond with very little rough, who deserves a forever family who knows that it’s the things which make us different, that make us so special. 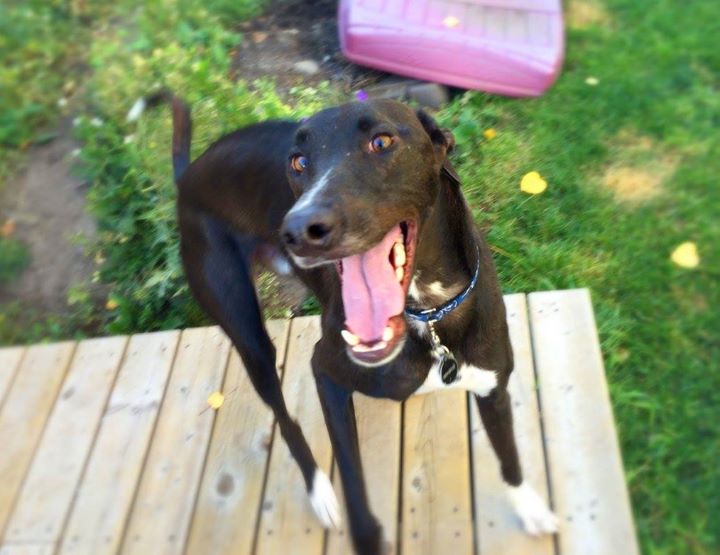