Felix, born on June 7th, 2013, is a happy, friendly guy. He enjoys attention and really tries to please. He crates well and enjoys rawhide bones. Watch him closely in the house initially as he learns the house rules.

Felix shows a lot of interest in cats and should not be trusted with them. He interacted well with the other Greyhounds and responded well when meeting Jack Russell Terriers, but caution should always be exercised with small animals, especially outdoors.

At the time of his dental, it was noted that Felix had some gingival recession around some of his teeth. Regular dental care will be especially important for him. The discoloration of his teeth is likely due to antibiotic use when he was puppy. This does NOT affect the integrity of the teeth.

Felix has been with us for a few weeks now, and in that time we’ve really started to see his personality come out. He’s a happy, exuberant guy who is starting to play with toys and frolic with other dogs. He loves car-rides and walks, and enjoys chase games at the dog park.

Felix is a very affectionate boy and enjoys being with people. There’s one special place to scratch on his throat and when you find it, he’ll be putty in your hands. Felix will bond very quickly and closely with his new family.

We’re still working on his greyhound manners and he’s learning not to counter-surf and bop children in the face, but that will come with a bit more training and loving discipline.

Felix is a really fun guy, he is playful and affectionate. He loves walks and car rides and meeting new people. Felix has met many different dogs and has been totally fine with all of them. We are sure his forever family will love him.

Felix has settled in very nicely. He’s a lovely boy with a nice even temperament. He’s very friendly and affectionate with people. He likes to lean against all humans that he meets but especially enjoys leaning against his chosen human. Felix definitely enjoys the company of his human and will follow you about the house.

Felix walks very nicely beside you on leash and won’t pull you into a tree if he sees a squirrel. He does enjoy watching those furry little critters though and would surely chase one if he had the chance!

Felix has met and played with all sorts of medium and large breed dogs. He has very polite greeting manners and all the dogs have been pleased to meet Felix! He met a little Westie Terrier the other day and definitely recognized it as a small dog and greeted him politely. He especially enjoys running and playing with big dogs!

He is trustworthy in the house, doesn’t jump up on the furniture or go searching for things to chew up. Felix is perfectly house-broken and doesn’t seem to need to go out all that often.

His only peculiarity is that he has a big startle reflex. This isn’t to say that he is a nervous dog. He isn’t. For example, if the leash brushes against him, he can startle (he’s afraid of it getting tangled) but this is improving. Or if something frightens him he can wheel around suddenly.

All in all, Felix is a real sweetheart and a great companion! 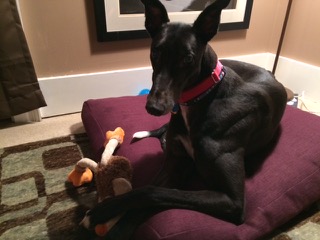