Hawk, born on December 10, 2012, is a sweet, easy-going kind of guy. While he enjoys new adventures, he’s also pretty mellow most of the time. He walks well on lead and has been really easy to have around. He enjoys rawhide bones.

Hawk did well in cat testing, but has never lived with a cat. He interacted well with the other Greyhounds and responded well when meeting Jack Russell Terriers. In both cases, caution should always be exercised and interaction monitored.

Lucky Hawk has been adopted and will be living in Vancouver, BC with his new owners and a young human sibling . He hopped into their car like he knew where he was going. We look forward to updates on this guy and meeting him again at the monthly Greyhound Gatherings! 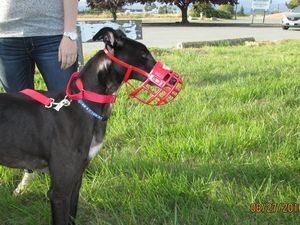