I just wanted to give a short update on our big little boy.

Wilson is a very bright and loving boy. He is such a baby and follows me everywhere! Yes, this does tend to drive me a bit batty, but that’s ok. It would be nice on occasion though to go to the washroom without someone waiting on the other side of the door!

He sleeps with Jaclyn and is a big bed hog! He knows when it’s bed time and waits patiently by her door until she tucks him in.

We’ve discovered that our boy LOVES to go everywhere and anywhere with us. His favorite place is the car. He can’t hop in fast enough and on occasion has forgotten to wait for the back hatch to be opened far enough before jumping in, resulting in a bonk on the head. He doesn’t seen to mind ‘cuz he knows he’s going somewhere.

I’m always amazed at how alert and conscious he is of every little movement. He doesn’t miss a thing. Wilson must have been trained to know about cats from very early on. Just mention the word kitty and he’s searching and sniffing everywhere for the elusive feline.

As far as his relationship with the Boss Abby, well, she is definitely the boss and is always the instigator of play and “try to take it away from me” games. Wilson’s only flaws at this point are his fear of loud noises, like vacuuming as well as the annoying habit of jumping up. We’re working on those and I’m sure with persistence as well as his maturing, those too will iron themselves out.

Tim has started taking Wilson along on his runs, and though he’s like to check out every dog, horse & person he sees, he’s a bit nervous around cars. 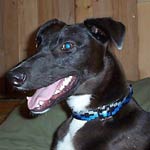