Viktor is a tall, shy boy but loves to be loved. He’s ok on linoleum/wood floors and stairs. Viktor will do well in a home that allows him to open up when he’s ready but is active enough to draw him out.

Foster update: Viktor has moved to a foster home where he can get more exposure to other dogs and continues to do extremely well. He only slept in the kennel one night and has had no bad house manners. He is still interacting with the dogs at daycare (large and small) with no problems at all. We have had small dog house guests (Snauz and mixed breed) and he accepted them no problem.

He stays home some days just so he does not get used to always being with me, and we have had no problems with that either. He does have the other dogs for company and I do think if he was alone he might have some anxiety, but no way to know for sure. He loves to touch and be touched a lot and would do well with someone who appreciates an affectionate, loving dog.

No food issues, it is a mass feeding frenzy around here some days and he has done
well with all the pushy dogs checking out his dish to see if it is any better than theirs. I am looking after a young Lab who can be quite obnoxious, no self control, just kind of bulldozes his way through and over the other dogs. Both Viktor and Sequel now just treat him like an annoying little brother! He is also very affectionate to the other dogs and they seem to enjoy his hanging his head on them.

Viktor is now named Badger – Linda and I thought his funny little pointy nose was very badger-like – also he is so shy and timid and badgers are so fierce, we thought he’d soon be gaining confidence with his new name!

Badger is doing great. I have discovered that he was aptly named, as his favourite thing in the world seems to be badgering Wiley! Wiley is a very good sport and lets Badger chew on him and bother him and chase him around – I’ve attached a picture of Badger doing what he does best. . .

I think they enjoy each other’s company and so far there have been no serious disagreements. Badger is the excitable one and Wiley is Mr. Cool. Badger is a serious snuggler and Wiley is a little more reserved, so it works out well. They make a greyt team! 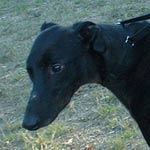