Jaguar, born on March 12, 2014, is an easy-going guy. He may seem a bit unsure of himself initially, but having a buddy to show him the ropes will help. He enjoys rawhide bones.

Jaguar showed some interest in the cats, but with careful introduction and supervision, he could probably learn to live with them.

Jaguar interacted well with the other Greyhounds and responded well when meeting Jack Russell Terriers, but caution should always be exercised, especially outdoors. 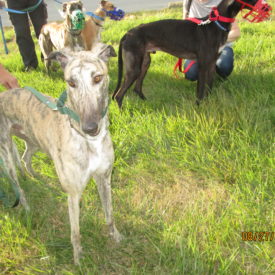