Hydrogen is a friendly, outgoing red fawn guy, born on December 29, 2015. He likes people and enjoys attention. He has generally crated well. Watch him closely initially as he may still have the urge to “mark” things.

Hydrogen showed some initial interest in the cats, but this is correctable. Given a slow, careful introduction, he could probably live with cats.

Hydrogen was reported to have problems interacting with the other dogs at the Greyhound farm where he came from. The behaviour at Colorado was fairly normal, so neutering may have helped that. He interacted fine with the other Greyhounds and the small dogs he met there.

Hydro is a very handsome (and very tall) dog who came from Florida in March 2019. He was previously adopted but as sometimes happens, things just didn’t work out.

Duke is very good on leash and takes treats politely.  He is ‘bossy but kind’ with the other resident dogs. They all get along fine and have even been seen all drinking out of the same water bowl at the same time.  He is intelligent and very food motivated – an excellent combination for training.  He would probably love to learn agility or nose work.

He is completely house trained and is confident walking on bare floors.

Duke is the kind of hound who really benefits from having a clear and consistent set of rules so everyone’s needs (his and yours) are understood and respected.  He is affectionate and loves attention but needs to be left alone when on his bed or laying down. He is NOT a couch or bed dog.  His bed should be in a space where he can be part of what’s going on, but not in the way.  He cannot be touched while he’s laying down – sleeping or awake (hence the NO COUCH OR BED rule).  This may change as he becomes accustomed to his new home, but it may never change.  There have been no problems in the foster home where his personal space is respected, and he understands the house rules.

He can be standoffish and sometimes nervous with new people and new situations but when given time and space to assess is usually calm.

We are looking for an experienced home with no young children (dog savvy teenagers should be fine but the no furniture rule needs to be maintained).  He is not good with being left alone in the house (cries and barks) so a family where someone works from home or is retired would be ideal.  Another, mature and calm dog would be helpful for him as well.

Duke is a lovely boy just waiting for the perfect home that will make him feel safe and loved.  He will repay the love one hundred-fold! 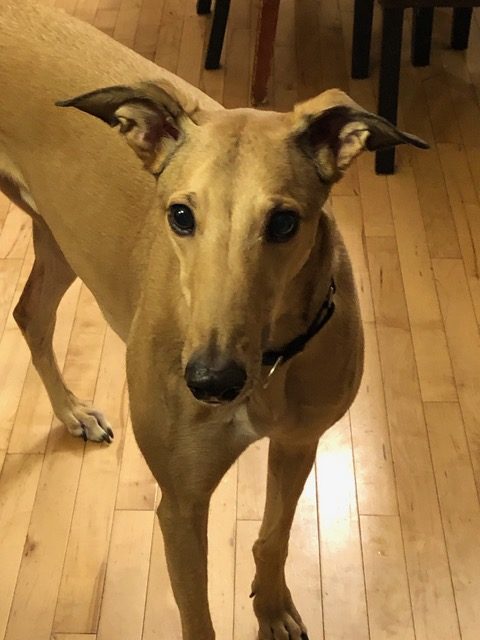