Benson (fna Orange) is a very handsome brindle male, born on March 28, 2014. He is a friendly, confident guy, somewhat independent, but he does enjoy attention and being around people. He crated well but it can be difficult to be an only dog after being in a kennel environment.

Benson showed some interest with cats but responded well to correction. Given supervision and careful introduction, he might be able to live with cats. He interacted well with the other Greyhounds and responded well when meeting Jack Russell Terriers, but caution should always be exercised, especially outdoors.

Here is an update from the foster family:

Benson is a big boy with a big heart. He has become very affectionate and has discovered the joy of Greyhound hugs. We expect Benson will quickly fall in love with his new family and bond completely.

He enjoys walks and has met dogs of all shapes and sizes, with no signs of aggression. It’s funny to watch him frolic with little dogs like an enormous puppy. He still worries when left alone, but we’re working on that and he’s improving quickly. Benson is strong and was initially a handful on leash; however, he now understands what is expected of him and he responds quickly to correction. Benson has never met a kibble he didn’t like. He has a strong appetite and knows when mealtime is approaching. He is house trained and has a reliable bathroom routine.

It’s a joy to see Benson coming out of his shell. He’s starting to take an interest in toys and enjoys playing at the dog park. Cozy beds are a big hit, too. Benson will make a loving addition to any family. 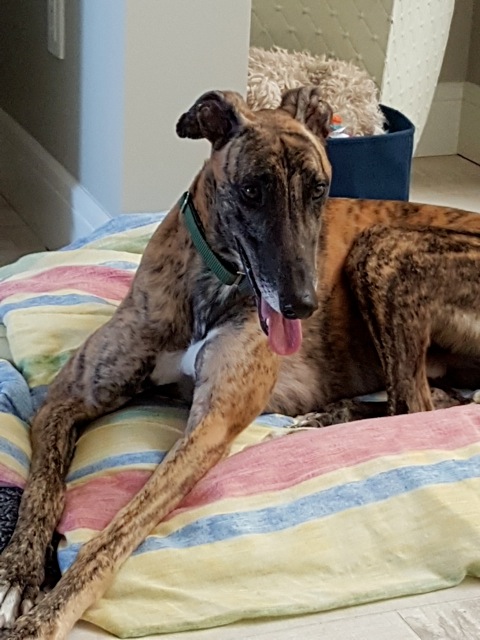