Oh Happy Day! That is Antsy’s view on life! He is a very happy, waggy, confident boy. Very interested in every nook and cranny of his new world, exploring with great enthusiasm.

He slept peacefully in his xpen until 8 am, that was a wonderful first night. He shows no interest in the smallish Shiba dogs, just ignores them. No conflict or dominance thus far with the other gh boys, or any of the dogs. You would never know he just arrived. He is a very secure, outgoing and affectionate boy. He did suffer a hock fracture at some point, but there is no apparent favouring of that leg. He may not be able to have an extreme athletic lifestyle, likely a normal leash walk and reg size yard play lifestyle, so he would suit a home that does not want a dog to hike or jog or walk for miles a day.

He is not a big boy, I’d say he is on the smaller side of medium. He has very perky uppy ears, sooo cute! Deep black super soft coat, just ready to be petted and hugged. He makes very good eye contact, I suspect he is a very wise boy.

Antsy/Indy is being returned because he is very vocal when left on his own. He is a lovely, sweet dog but does need another dog companion or someone who can work through his separation anxiety. He is vocal when left alone so would not suit a condo or townhouse.

Paddy, who was born on May 22, 2009, arrived from Florida after having run 126 races, retiring at the age of 5 years. Paddy has been living with his sibling Erin for several years but has been returned to NCGL because of his owner’s health issues. NCGL would like to find a home that would take both he and Erin into their care under the Forever Foster Program.

He is a large boy and due to a hearty appetite, he tends toward being on the heavy side.  Any home he is in should secure their trash and not leave food out because of his strong interest in food.

He likes to lie in the middle of the kitchen which can be a tripping hazard. This is partly to be near his humans and partly to be available for any food dropped on the floor.

Paddy is on daily eye drops for life to prevent deterioration in his vision, but otherwise he is in good health.

Around the house and on walks he is quiet and easy-going and interacts well with all other dogs he encounters.

Paddy is very affectionate and enjoys a lot of cuddling.  Paddy is a very easy and an enjoyable dog.

Paddy was cat tested and he was perfect. Whether the cat was on a chair right in front him or on the floor he couldn’t care less. We think Erin might have been a bad influence!

Unfortunately, Paddy has developed a terminal kidney disease. Here is the update following his examination and tests.

“We just got word this afternoon that due to an administrative foulup of some sort, the second diagnostic test for Paddy was not done. Dr Hislop feels, though, that she already has enough confirmation of the PLN to go ahead with remedial diet and medication. We are now considering the PLN diagnosis definite, and so we plan to keep him, assuming that’s agreeable to everyone. He is doing well here, and with his health issues we feel it wouldn’t be fair to move him again. Apart from the kidney disease, he has Pannus. It has been caught early and slowed down with eyedrops, and apparently it’s unlikely to cause blindness, given his age and the fact that his kidneys will probably give out first.”

“Although Paddy has these health issues, he doesn’t come across as a sick dog at this point. He is a bit slow-moving, but we’ve slimmed him down a bit (hopefully by diet and exercise, and not because he’s sick), and he has started to run a little. On walks, he often resists when we turn around to go home, and looks annoyed that the walk is coming to an end. He seems to be enjoying life in general.”

Paddy will stay with his foster family, enjoying his life with two sibling Greyhounds and family that loves him, until his time ends and his journey takes him to the Rainbow Bridge. 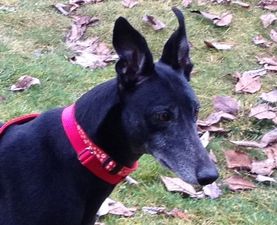