Toro, born March 21, 2011, is a sweet, goofy guy. He runs and plays like a little colt. He can be a bit reserved at first, but his goofy side comes out when he gets comfortable. He enjoys chewing on rawhides and sometimes plays with stuffed toys.

Cats: Toro shows a lot of interest in cats and should not be trusted with them. If the behavior is strongly and consistently discouraged, it may improve in time.

Other Dogs: Toro generally did well with the other greyhounds. He can sometimes be insecure in large groups of dogs and may growl, but it is really because he gets scared. That only happened rarely. He responded well when meeting the Jack Russell Terriers.

Toro appears to have had some trauma to his muzzle as a puppy. It caused his jaw to grow unevenly and twist slightly. It does not seem to cause him any difficulty but may make him more prone to dental disease since his teeth meet abnormally. He had two extra incisors extracted at the time of his dental as they were causing crowding.

Toro also seems to have a stricture somewhere in his esophagus. Diagnostic testing was not pursued as this seems to be easily managed by soaking his food in hot water for about half an hour prior to feeding. The idea is to make the food soft so that it passes the stricture more easily. If the food is not softened appropriately, Toro will regurgitate it. Since the extended soaking was instituted, he has had no episodes of regurgitation. He has been eating Pro Plan Performance dog food soaked in very hot water for 30 minutes. 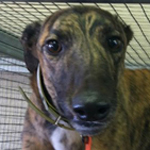