He is a wonderful puppy, about 7 or 8 months old, and approximately 31″ at the shoulder.

Truman has become my second shadow. I think Brian is jealous because Truman is definitely my bud. Remember I said that Brian wanted a dog, but we all know who’s dog it will be. Hee Hee. Well that’s happened. Truman is my dog. Last night when Tuck and I went to class, Brian said Truman ran to the door whining and then went to the window and sat watching outside for me to come home. He didn’t want to move until I got back. He’s really smart. I am surprised. He’s stubborn but he learns so quickly. He hasn’t gotten into anything yet, but our house is so small he’s rarely out of my sight.

He now heels on lead, sits, lays down, does a three minute stay, and best of all he loves his crate. We have to shut it sometimes because he loves to go in and out, in and out. It’s amazing how much he’s changed in five days. I haven’t seen any of the “bad” behavior Amy warned me about but I know it’s still soon and he’s trying to figure out his boundaries. He was really good at class and I think he’s going to quickly excel.

The best thing is he’s really goofy. He’s so awkward that he makes me laugh. He sleeps throughout the night on a bed on the floor in the bedroom and doesn’t wander around at night. I couldn’t ask for a better dog.

Tuck is starting to initiate play with Truman but Truman doesn’t know what to do yet. He takes Tuck’s vocalization as a threat. They’ll figure it out I’m sure. They already don’t like being apart. They do a lot of nibbling and kissing one another. It’s so cute. 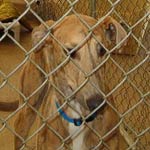