Update from foster home: He needs to put on a few pounds as he is terribly underweight (and he’s tall so he looks like a big beanpole right now), but Dr Dekens and previous foster home think it may be stress related from moving around so much.

He’s developed terrific house manners (but I’m keeping an eye on him as he’s got a big food drive).. and he’s already graduated to being let loose in the house (while we’re home) and he doesn’t even look twice at the kitties or get into anything. He just finds a spot to sprawl out on somewhere near you or even in the next room and takes it easy. We’ve also had no accidents (knocking on wood) and hope to keep it up!

He’s a very gentle calm fella, although he can be coaxed to play and chase (a human!) in the back yard. He is very good meeting all dogs, but looses interest after the first little while. He goes into his kennel willingly on his own, but once he’s in and realizes that his people are gone, he may protest a little. He will sleep through the night in his kennel though without too much fuss.

Otis has really been blossoming lately – he’s getting very confident (still not thrilled with toddlers – who can blame him?) and he even approaches people on the street for a pat on the head when we go for a walk. He’s more vocal now, too, and I will get a “Woof” if I’m not getting the coats and leashes on fast enough to suit him! We left them alone loose in the house for about an hour on Sunday when we went out for lunch with our kids and nothing was chewed, etc., when we came home. 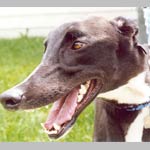