He is 5-6 months yes BUT he is almost as big as Fizzy. Looks like a BIG boned solid hound. Beautiful deep red brindle markings with white feet. He was wonderful in the car and is in really good condition apart from being totally untrained and a major leash puller.

Foster update: He is doing fine around my cat although he shows tons of interest in anything smaller than him. I would think of him as trainable rather than safe.

He is very smart! His house-training is coming along nicely. He had a couple of accidents the first day but hasn’t had any since (he needs to go out almost every hour it seems!!). He was a terrible leash puller on our first walk but we have had him on a gentle leader since and it has made a world of difference! We are trying to teach him to sit and he is almost there… You know he wants something if you see him sitting 🙂

He loooves to be around people. He will follow me from room to room and plop down right beside me. The first night we tried to crate him in the kitchen. He would have no part of that. He cried till I came downstairs and slept beside him. Next night we moved the crate into our bedroom and he
was perfectly fine. Affectionately known as Teddy by his foster parents.

He is a typical high energy greyhound puppy – lots of FUN and lots of WORK. He must have a fenced yard and preferably another dog as a companion to wear off some of that energy. Ideally someone should be home with him a good deal of the time. He is learning to walk nicely on a lead with a gentle leader/halti and he is affectionate. More pics at http://members.shaw.ca/Greyhounds/

Andy and Teddy (now named Dexter) are getting along well. Dexter wants to play a little more than Andy would like, but they are sorting it out. The cats aren’t so sure though. We haven’t been able to properly introduce them because he gets so excited, but I am sure that eventually they will be able to co-exist nicely. We really love him, he’s such a beautiful dog, and so energetic, we take him for a really good walk everyday, and we also let them run twice this week.

He keeps us on our toes, and he makes us feel very loved, we are very happy and I think Andy is happy too. 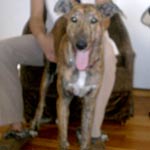