Foster Update:  Nails should be named this year’s 45 mile-an-hour couch potato poster-dog!  It didn’t take him more than a couple of hours in the house to be up on the couch with all four paws in the air!  He is so happy to have a full tummy and a soft place to rest his head.  It takes a good deal of coaxing to get him to leave the couch, but when he does, he’s stuck to your side attempting to get some well-deserved extra attention – he would make a great line-backer!

He is curious about the house and has checked out every corner.  The hardwood was a bit tricky at first but with the help of some strategically placed mats and cheerios, he’s pretty much a master now.  True to Greyhound nature, he loves food and has given up on being a law-abiding Greyhound in favour of stealing food (especially pizza) off of counters and tables (can’t blame him – he is tall enough to see!).

He continues to learn about space bubbles when the humans are eating and how not to counter surf.  He gets along great with the 3 terriers and follows their lead on what to do between eating and resting periods (although he is much calmer than the terriers).  Nails doesn’t mind if dogs or people are in his space and he has absolutely no food or toy aggressive behaviours.  He is catching on very quickly about going outside to do business but is still getting used to the cold weather and steps around the snow if grass or pavement is available.  He enjoys going for walks and is fabulous on a lead, he continually checks around to make sure that the pack is all together.  He has no problems with being in his crate, although rarely goes there anymore in favour of being with the rest of the family on the couch.  He is so calm, sweet and happy, he loves mornings and greets us with the wiggliest tail and just one little roo!

Nails is a delight to have and has made amazing progress in a week.  A loving family will be very lucky to include Nails in their home.

This boy has 44 races registered. He is cat safe – he did show some interest, but his ears were not up and he did not chase the cat. Very nice boy and handsome too! Offspring of Kiowa Sweet Trey and Fraulein Marla.

A farewell to Nails (nka Maqsoum) We wanted to let you and the folks at NCGL know that this past Wednesday our family said a peaceful goodbye to the kindest, gentlest and most loyal friend we’ve ever had. Maqsoum (Tough as Nails) been such a huge part of our lives for the last decade – we will miss him so much and are definitely feeling the loss.

After 12 and a half glorious years of running full-tilt on sandy beaches, giving enthusiastic wedgie-style greetings, “rooing” along with our singing and successfully pilfering meals off countertops, his athlete’s body started to show the effects of his age, his many adventures and his mishaps. Over the past weeks, we could see he was having increasing trouble getting up and down, moving about and resting comfortably, despite the pain management regime he’d been on for awhile. It was so hard to decide to put him to rest, but we’re thankful he’s no longer in pain and is enjoying the longest, most sandy beach in doggie heaven!

Thank you for your role in helping us finding Maqsoum, who has truly been a soul mate to us. We can’t even begin to say all the ways he added joy to our lives.

We’ve added our memorial picture of Maqsoum – we had a family service for him today. Could you please add it to your Memorial page?

Thanks from the The Tyrrell Family 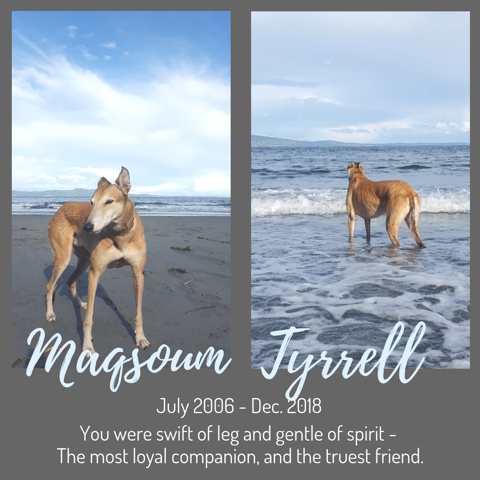