Penquin is a brindle and white parti color boy who is not quite 2. He is quite the cuddle-bunny.

He has a slight limp. He is about a year and a half and never raced because of the lameness. On x-rays, we were only able to find a slight amount of degenerative bone changes in his shoulder. The lameness has improved in the six months he’s been here which might have been precipitated by a joint infection as a puppy. He doesn’t seem any worse when let him run and play and it’s usually a pretty subtle lameness, but he might need some Rimadyl or something through the years at times and he would probably benefit from glucosamine supplementation like most greyhounds.

He’s a really sweet, and friendly parti colored boy but is not cat safe. He crates well and does not show any signs of separation anxiety.

Foster home update: he wants to be near and to be loved this; however can be a problem when you are driving!!! On the trip home from Nanaimo he stood with his back legs on the floor and his chest draped over Shelley’s lap. Last night he had to repeatedly be stopped from climbing onto the bed (no dogs on our bed–we have a water-bed)

He is definitely interested in small dogs, but think he is trainable -he is really beautiful and so full of love. He is a little immature, but he is only 18 mos after all and personally maturity only begins at 4 yrs (if you are lucky). 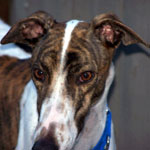