Cason is a big handsome boy who is, at this point, a bit on the reserved side. He seems very sensitive and will whimper if he is unsure about something. (such as going UP stairs, foot wiping etc) He has been very gentle with my two big dogs, although there has been no real play between them yet.

He pretty much ignores our cat, just sniffs and walks away. His kennel training is going very well, he goes into it with ease and considers it his safe place, preferring to hang out in there when he wants to rest (he hasn’t discovered the couch yet, but I’m sure that is coming!) He seems more shy of men, but does come around, head down and tail wagging for some love to both of us. As for small dogs and children, I just don’t know, I haven’t had him around any small dogs or kids.

He walks very well on leash and loves going into the backyard for playtime. He has even tried to initiate play with me outside, but then seems confused as to what to do next. Stairs are coming along nicely and he will now go UP, as long as I am right beside him in case he gets stuck. He does go DOWN stairs now like a pro.

I can’t tell you how happy I am with Cason (now Oliver). Maybe one of the reasons people love Greyhounds so much is that it is so rewarding to watch their personalities emerge.

My sister suggested that this is the first time in Oliver’s life that he has been offered any decisions to make, and I think she is right. For the first week, he was so nervous when I would do things like sit on the back porch, but leave the door open in case he would rather be inside. He paced and paced – in the house, in the yard, then back to the house again. I can see that in his previous life, he was told where he had to be at all times, and that he may well have been looking for more direction from me. Now, 2 weeks later, he loves making up his own mind, and is even starting to ask for things. 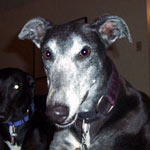