Remington arrived here after being in a cast for two months for a hock fracture.  We waited a while to see how it would do since it was already an old fracture at that point.

When it didn’t seem to be healing well, we did surgery on his hock in May.  He had an external fixator placed to fuse the hock.  The fixator was removed about a month ago.  He is definitely better than he was, but it will never be a great leg for him.  I would expect that he will show improvement in the use of the leg over the next year.

As far as the ride back to Canada, he should be fine riding loose.  He doesn’t really need any special care at this point.  Jumping up into vehicles, etc. will be difficult for him and he will never be a super athlete, but he is stable. 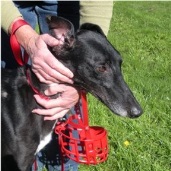