Earl is a 3 year old cat-safe black male. Earl is outgoing and happy. He’s a smiler too!

Earl is doing amazing!! My puppy Jerry will chase JB (my older fatter b&w cat) in the backyard. Earl will take it all in, then go lay down or goose me. The cats rip around this house and Earl
couldn’t care less.

JB will snake in an out of Earl’s legs, the puppy slobbers all over Earl’s ears, and Siouxsie, the kitten, sometimes sneaks a snuggle with Earl. He’s the fartiest, smelliest dog ever.

His bed is the couch. If I fall asleep early on the couch, he’ll go into my room and climb up on my bed. Once I get up and really go to bed, we swap spots. Other than me falling asleep on the couch, he never goes on my bed.

He’s discovered the delight of pig ears, loves absolutely every person on the face of the earth, must greet any dog and/or cat within sight, and he’s started chattering his teeth at me when he’s really excited (but too excited to bark). Jerry helped Earl find his voice and they play a lot in the backyard. He’ll bark at me if I’m up too late studying, and he was very jealous of my last boyfriend. I’m not sure why, we spent the same amount of time together as we always do, but I think Earl kinda thinks I’m his girl.

But, the cats are Earl’s cats to defend and protect. I had a stray come into my yard one night and picked a fight with JB. I let Earl out, he chased the stray and walked up to JB and gave him a snuff on the head.

The house has calmed down and everyone doesn’t just co-exist, they recognize each other as their family. It’s great. I’m very lucky Earl came into my life when he did. I was having such a hard time with my mom’s death, and it was a dark period. He’s my big black angel who walks on four legs who farts all the time and sleeps on the couch . . . and I wouldn’t have it any other way . . . he saved my life. 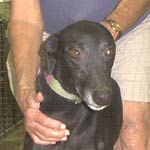