Maple is a super sweet 10 year old, very quiet and loving with lots of personality. Maple bonds closely to one person and loves to stick to that person.

She is ok with cats and other dogs as long as they don’t BUG her. She will crab at them if they get in her space but she has never snapped.

She eats well and sleeps quiet through the night. She’s an absolute doll with a very gentle nature and is a joy to share a home with.

update:  When she is feeling extra frisky (which is not very often) you even catch her trying a play bow at a new dog, or doing a quick donut in the back yard. She may be old, but she is still in good shape. We even got her out running in a fenced-in baseball diamond and she kept up with the young ones!
She is getting used to having animals in her space, and during daycare, you will witness her tolerating puppies and small dogs (jack russel terrier size) jumping all over her, she just ignores them or walks away. If she ever has anything to say about it is usually justified. She completely ignores the cats, unless they jump on the bed with her, then she will jump right off and curl up on the floor.

She is learning where all the cozy spots are in the house and is spending less time in her kennel, and more time on one of the beds or even on the couch (hope her new home can spare some of their furniture!). She also recently discovered that if she is on the bed at the same time as her people, she can catch a snooze and get lovin, so this is happening more often. She is still sleeping in her kennel and doesn’t make a peep all night, then greets you in the morning with a huge stretch and a little wag of her stubby tail and some nose rubs.

This old girl has lots of life and love left in her, and everyone who meets her just melts!

Our sweet Maple passed away Friday September 30th, 2005 at the age of 12 years old. Dr. Dekens helped her cross the bridge on her favorite couch, in our arms, after finally succumbing to a hard battle with Cancer.

She came to us about 2 years ago from the Calida racetrack. Missing her whole tail and bearing many scars on her little face and tiny frame, you would guess that in the first 10 years of her life she had always been a little feisty and full of spirit, but we’ll never know for sure. All I know is that she ended up being the sweetest, most gentle, angelic soul that I ever had the pleasure of loving (although she did always take sport in lipping off select new greyhounds we’d meet at walks or functions -I didn’t encourage this, but I always secretly admired her zest at such an age 🙂 ).

Maple was a princess and loved to be ‘adorned’ in fancy new collars or sporty new jackets and would hold up her little nose up with pride as you slipped a shiny martingale or the neck of a coat over her head. She also had a bouncy playful side which she mostly only shared with her human friends, but would show you how much life she still had how she could still leave the other greyhounds in her dust (if she wanted to).

She liked to show you her tricks (which basically consisted of sit and down) and would eagerly hold her mouth open like a little baby bird waiting for you to slip a tasty treat down her gullet after completion. In her time with us, Maple quickly learned that the couches were expressly
put there for her comfort, that meals were abundant and ‘gourmet’ since mom
was always on a quest for the food she REALLY really liked (duck, pheasant
and tripe -(those who feed it know what I’m talking about!) were often on the menu).

She learned through the benefit of her clicker training classes, that people very often had treats on them and with eyes that would just melt your heart, very few could resist giving her ‘just one’. Maple also discovered that she really couldn’t do anything to get herself in trouble (and only occasionally would she try).

Maple was our special little girl and although her time with us could never have been long enough.she gave us a lifetime of love while she was here. 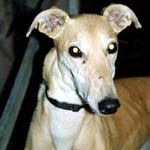