With great sadness Jim and Leslie phoned Bryan this morning to let him know that they sent Max to the rainbow bridge. We don’t know all the details but are passing on what little we do know.

Max had been suffering from a thyroid condition that was being well managed with medication but he recently started having seizures. This morning he had two severe seizures that he would not recover from and they made the brave decision to send him gently on his way.

Max was certainly a special lurcher and one of the *wild bunch* that came as a group from the Edmonton Pound. They were all untouched and completely un-socialized to humans. While the three puppies were quick to love humans several of the older dogs were extremely afraid of us. Bryan and I unloaded Max off the truck without even trying to remove him from the kennel. His kennel was placed in an outdoor run and we went in the house. It took him 4 hours to work up the bravery just to come out of the kennel and we spent the next 4 weeks getting him to come close enough to be touched. After several months he was ready to try and find a home of his own. Enter Jim and Leslie……

Jim and Leslie knew he was a special needs dog and were ready for his behaviour. They had lived with a greyhound like him in the past and knew exactly what it would take to help him enjoy life. They spent many months making friends with this extremely shy boy and won his heart slowly with love, kindness and much patience. Even years after adopting him they would discover hidden fears like the day Jim came out of the bedroom with a hat on and Max flew off the couch in a fear filled attack. When Jim spoke quietly Max stopped dead in his tracks. He recognized that voice but was too afraid to understand the entire situation. Jim slowly reached up and removed the hat. Much to Max’s amazement his beloved Jim appeared out from under the stranger in front of him. Who knew a hat could cause such a commotion!!

As fearful as he was of humans when he first arrived he had a BIG and tender heart and he spent his lifetime learning how to love and be loved! Max will be dearly missed by all who knew him. 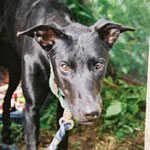