As for Dandelion Wine, she is a thick, larger (for that track) black girl, probably weighing about 65+ pounds (i should know because right now I have to carry her everywhere!).

She was very unsure at the track and was trembling upon meeting me. After the ride home, it was quite a process then getting her ‘out’ of her kennel. But then, once she was outside, she seemed a little more at ease. I set her up in a kennel in the room with Maple, and she didn’t make a peep all night and stayed there (without any intention of coming out) for the night and part of the next day. I unfortunately had to pull her out of the kennel (I don’t like pulling them out of their ‘safe’ place) to do her business (I had to leave her there for a day and didn’t want to chance and accident in there), but once she was outside, she was a different dog! Her and Maple actually hit it off like gangbusters (I honestly think she might be one of Maple’s pups!) and Maple loves her.

Update:
Well Dandy is really starting to settle in. She loves the company of humans and wants to be where you are (she’ll follow you all over the place) but is still somewhat leery of people and new situations. She still needs her hiding spots, but now doesn’t totally shut herself away from everyone and will come out when coaxed. She likes to lounge on the couch in true greyhound style and will even cuddle up to you on the couch (Like if there are two other dogs on the couch and you’re next to the last piece of real estate!). She’s slowly building her confidence, but will probably always be a shy little girl. And still needs a lot of gentle guidance.

She is however just wonderful with the kitties and pretty much just ignores them. Dandy would probably also like having another calm confident dog around as her mentor since she looks up to the others in her ‘pack’ when she’s unsure. 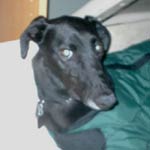