Moss is a white and brindle, 13 months old (give or take) this month, neutered, up to date on shots til about September, microchipped and tattooed. He was named after the British race car driver, Stirling Moss …. “fast and a little bit eccentric”.

He’s a big boy, about 29 inches to the shoulder, with some maturing to do. His coat is the longish, wispy, wiry one, shortish in the summer and longer in the winter when he gets a bit of a neck ruff. Moss is a pleasant, quiet dog, a little shy, particularly with men, but not fear aggressive. He was injured when Ashley and her husband got him from the SPCA – broken ribs – the ribs healed well as he grew and should not pose any problems in the future.

He’s good with other dogs (lives with an on-the-go young black lab female and enjoys his runs at the dog park), he loves car rides and loves to run, but hasn’t exhibited much if anything in the way of prey drive.

He’s good with kids of all ages, cats, and birds. Has some separation anxiety but does well home alone, as long as there’s another dog around, or if he’s crated (enjoys his crate). Would do well in a home with another dog, or in a home with somebody home most of the time.

His owners are being selective about Moss’s adoption, and they are not in a huge hurry to find him another home (4 months or so?).

Moss is a wonderful member of our family now having overcome a few problems at the start. He is a pleasure to take to the dog park as everyone is amazed by his speed and sociability, and his obedience. He comes very easily when called and loves to play with other dogs.

We have 25 acres on Bowen Island and he goes quite wild roaring through the forest and leaping into the puddles and ponds. It took him a while to get used to my husband, but he is very cuddly now. He was the star of “puppy” obedience last fall. 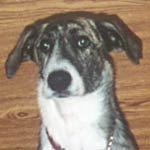